Where the kids don’t come by car anymore 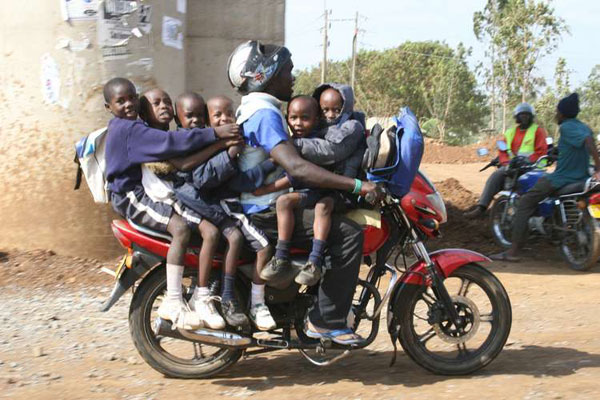 My formative years were also some of my fondest memories of school. I recall changing schools from St. Theresa’s Primary School and joining Lake Victoria School. It was a cultural shock and awakening in many ways. Here the kids didn’t wear “nytil jinja shirts” and dresses. Instead the boys wore white poplin shirts and ‘American khaki’ shorts. The girls’ dresses were also made of checkered green and white poplin. There were a number of similar schools. There was Kitante, Nakasero and Buganda Road (formerly Norman Gordinho).

There was a library at the school where one could borrow books. Maybe that’s how I became a voracious reader. Mrs. Philips could teach you how to play the piano if you pleased. There was a main hall replete with stage and drama class was compulsory. For games of course there was cricket and rounders. Not that you couldn’t play footie but well, you were being brought up to be genteel. For ablutions, you didn’t have to squat over a hole in the ground. That was reserved for the African quarters were we lived.

It was all bliss until the Amin coup arrived on our doorstep and the whites and Indians started leaving in droves. There were 18 reasons given for the Amin coup. (I guess there are a number of reasons for every coup.) If my memory serves me well, one of the reasons was the fact that we Africans had been excluded from enjoying economic freedom. And sure, as day follows night, the Amin kids joined us to enjoy these newly won ‘economic freedoms’. Mr. Yates, our headmaster then, had always strenuously discouraged our parents from serving us fizzy drinks for our break. Well, that was until the Amin brood drove in with a crate of soda to boot. Mr. Yates new better than to keep on insisting.

While we were separated from many other Africans on account of the slivers of privilege our fathers had been able to receive on account of their education, it was still possible to cross the boundaries. That is why I was able to attend at ‘Lake Vic’ as we called it. By simply being far sighted, my old man had somehow managed to buy me an education that cost five times what I had been paying at St. Theresa’s. He had literally thrown me upstairs. He knew better, having been brought up by a sister who was illiterate and could barely afford to keep him in school.

Fast forward to the tumultuous 70’s and early 80’s. As a result of the economic embargoes and civil war, standards began to deteriorate in the education sector (as was with all other sectors). Funding was short and many intellectuals, including teachers, fled into exile. In a sense the country really fell apart more or less. Again fast forward to the 1986 liberation when a semblance of order was restored in most parts of the country. The new government was faced with the problem of giving more and more people an opportunity for education. Despite the war, population had never stopped growing and the government had to do something.

That is when someone made the universal primary education declaration. In Uganda we followed up this UN declaration with our own version of universal primary education. And that is when the ‘middle class’ (read those who could pay) started leaving in droves. They voted with their money and cars not to drive their kids to Lake Vic, Buganda Road and the like which had become UPE schools. You may know where they moved. Not far away I guess. But what I do know for sure, is that when I drove past Buganda Road Primary School in the wee hours of the morning two weeks ago, the road was clear and the kids were arriving on foot or by boda boda. So subtle but real are the changes taking place in our society. You can’t be blamed for missing them.