When the village does not raise its children 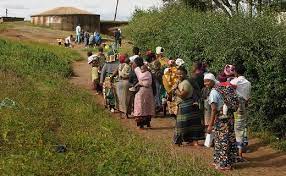 How times change. When we were growing up and roaming the village, the adults seemed to know all of us. You could hardly put a foot wrong without getting into trouble. Throwing stones, swimming in the lake, engaging in fist fights and vulgarity could get you whipped. And the whipping didn’t have to wait for your parents. The nearest adult would administer the corporal punishment. And that meant double jeopardy because your parents were sure to repeat the punishment in a harsher manner once the news reached your corner of our very small dominion!

We were truly children of the village and we were raised by the villagers. “Empiisa enungi” (good behavior) was demanded and expected of us. If an adult spoke, you did not ‘look them in the mouth’. That is, you did not speak back at them disrespectfully. Even if you did not particularity like the adult in question, it was not the done thing to get entangled in an argument with your ‘betters’. If you passed an adult on the road, you stopped and greeted them. If they happened to have a car, they also never left you behind. They drove you to school. That was how we were brought up. We just did not grow up on our own. The village made an investment in the village kids. Because of that investment, some things were off limit and taboo. ‘Mwana wani’ or whose child was the mantra we grew up with. This was in the context that bad behavior was a reflection and embarrassment to your biological parents and relatives.

Not anymore in these times. A few weeks ago, the His Majesty the Kabaka visited His Excellency the President. I am informed that they had a cordial engagement and discussed some matters of mutual concern. It is not important whether they agreed or disagreed. After that, each went his way and we did not hear them make any crude remarks  after their meeting. At least not the Kabaka.

Or maybe am wrong and being vulgar  and crude is the way of the powerful these days. The spokesperson of the President’s party then took it upon himself to insult and write a few distasteful things about the Kabaka. I do not know if he was writing on behalf of his master, or he was simply behaving like some of the kids in our neighborhood whom even the adults had given up on. You see in every neighborhood, there were kids, whom we were wont to ask ‘ani yabakuzza” or literally translated, ‘who grew them’? It was a rhetorical question because we knew that like the mangy dog  that fed from the neighborhood rubbish dump, no responsible parent would want to  ‘grow’ these types of fellows.

Ideas like respect, politeness and grace in speaking their opinions (which we should respect by all means) are alien to them. Eating from the rubbish dump and stealing a few eggs from brooding hens here and there seemed to imbue the mangy dog with a sense of being ignominiousness and condescending. You were also likely to find these dogs scarred, or limping every now and then, for if the owners of the brooding hens had happened to catch them in the act of stealing the eggs, they would get whipped. Hence the saying, ‘akabwa akabbi, kagumya mugongo’ or the thieving dog must have a strong back.

But then again, since we no longer live in villages and ‘finishing schools’ ala Nsamizi are few and far in between, this behavior should not surprise you. There is not much that our leaders say these days on which you can hang your life. One day they will say torture is okay. The next day they will say it is forbidden. For all the things that we held dear yesterday, you are on your own now and better be careful, lest a mangy dog bites you!