The curious case of the Nakumatt elephants 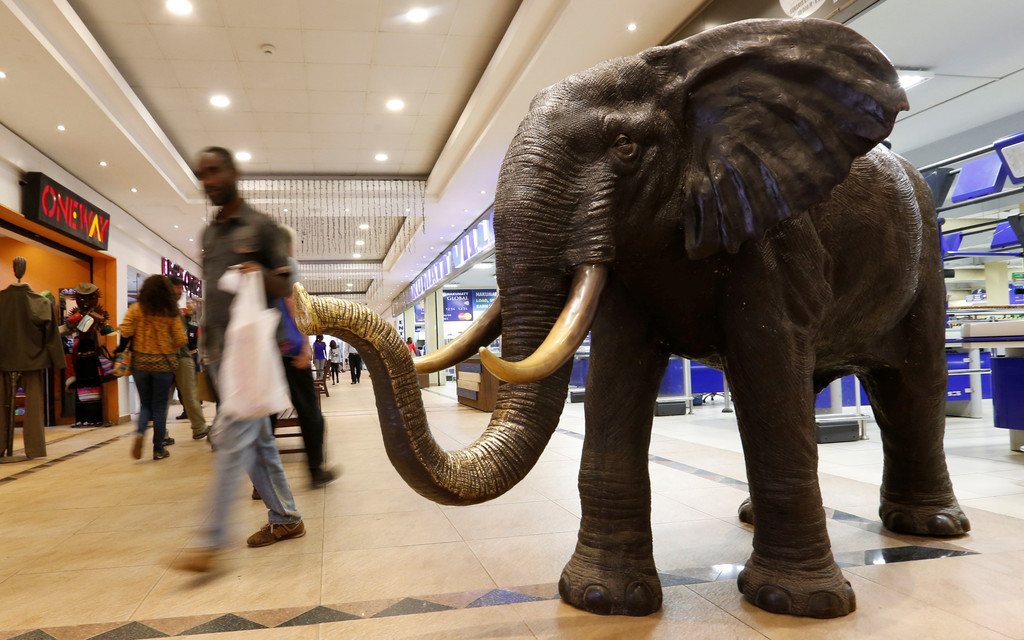 Last week, while reading the East African, I chanced upon an innocuous advertisement informing the public about the appointment of an administrator for the once mighty Nakumatt Holdings Limited. Innocuous because it was buried deep in the nether parts where the less curious minded are likely venture. The advertisement reminded me of the wonderful times I had enjoyed at the fast moving consumer goods retailer’s. It reminded me of the amarula fruit, and the elephants that grew dizzy (read drunk) eating the ripened fruit of the amarula tree.

It also reminded me of fetishes and obsessions. We all have them. I do and so have you (one day I will tell you about mine). The owner(s) of the Nakumatt chain seemed to have had a fetish about (bronze?) elephant statues. Where a Nakumatt branch sprung up, you were sure to find a medium sized elephant statue. Standing right at the entrance, you would not fail to notice it. Some adults stopped to take pictures, while some kids took turns at playing with the elephant trunks. All the while, the cashiers were ringing the tills as money spewed in.

So on reading this advertisement regarding the apparent demise of my favourite local shopping chain (and being a man of fetishes) I could not but help think about the now lonely and cold elephant statues. How many were there? Where were they? How much had the elephant statues cost? What was the ‘lucky’ administrator going to do with them? Was he going to take one for him or herself? How had the Nakumatt honcho chanced upon the tagline of ‘we lead and others follow’?

Idle thoughts really. I soon snapped out of my reverie and started thinking about the more serious implications of the giant chain’s collapse. Jobs and livelihoods had been crushed. Suppliers had lost their deposit. An empire built over half a century of hard work had collapsed and with the foreclosure, some of our pretensions to the sustainability of our middle class dream must have been buried therein.

The story has been the same for quite a number of big names over the last two years. My Nakumatt, and a few others that come to mind all tumbled in the storm of economic turbulence. But what happened? My two cents is that the winds of fortune changed. They started blowing in the opposite direction and forced the edifices of these once grand business empires to be exposed. Those edifices were the proverbial drunkards feet of clay. Thoroughly inebriated, and embarking on the homeward journey, the drunkard elephant is easily blown over by the wind as the amarula juice diminishes the capacity to navigate.

That is possibly what happened to my lovely Nakumatt. Dizzied by success, elephant after elephant statue purchased, it was inevitable for hubris to set in. For most companies at this stage of success, always look out for abnormal growth, a one-man board in which the position of chief executive is fused with that of chairman, and the bizarre illusion of infallibility. When the administrator is done unraveling the dealings of Nakumatt, I would love to be a fly on the wall. To find out how much those elephant statues cost, and what they are worth now, seeing that they may be worse for the wear.

But take heart. Failure is not fatal. It is the reason they created the limited liability company. So that men (and women) could take risks, invest resources and grow the system of capitalism. Some would succeed and others would fail. The fail-safe mode would be in the form of a separation of ownership and management, personal wealth and business assets. The businessman, who understands this edict, is often unfettered in adventure, and thereby free to buy a few more elephants. Elephants, like the proverbial phoenix, do rise again. Soon, another Nakumatt, will rise in place of the demised one.