On the poverty of opportunity: between ‘okufukamira’ and ‘imbalu’ 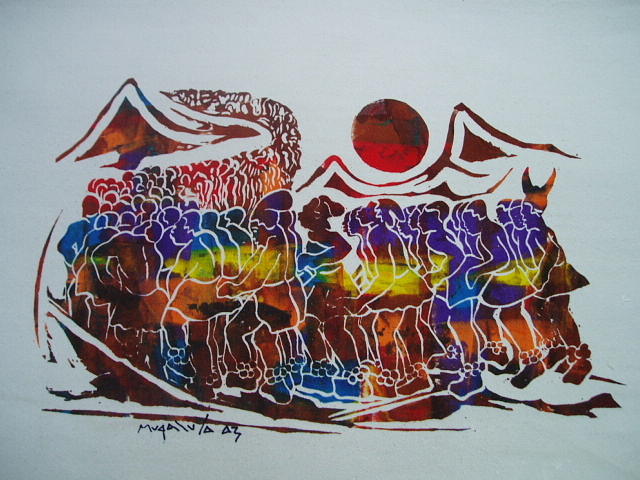 This time we traveled east. Only that we travelled a stone’s throw away to a small village in Mbale called Namabasa. Our mission: to attend the celebration of the life of Mama Irene Wekesa who died a decade ago in a grotesque accident that had left grave scars on her relatives. She was an incredible woman, this Irene Mambea Wekesa.

She had lost her husband at the tender age of forty in 1989.  Left with six kids, she had struggled to raise them. Having just accomplished the incredible and lonely task of turning them into responsible citizens, she was mowed down by a crazy trailer driver on Jinja Road in a very grotesque manner. May she find eternal rest, her earthly chores being done.

As we travelled east, along the Tororo-Mable road, I noticed the land was parched and it was quite hot. There were fewer trees, and the once lush vegetation was being cut down for fuel. The swamps had been invaded and these too were in danger. I also noticed the meagerness of opportunity and the scantiness of economic activity (beyond retail trade) as we drove further east. The abject poverty and wretchedness of the environment was crushing.

In my musings, I could not help but wonder what a coincidence it was that this same week, someone had sent us a study on GDP in Uganda measured by districts. Using a novel method that relied on nightly light emissions, the authors had determined that the eastern parts of Uganda were some of the most deprived. And so here I was witnessing for myself the deprivation some of our people lived with. It was clear that most of the people along the route we travelled were in no way connected with the growth statistics we kept on exchanging in the air conditioned seminar rooms of Kampala.

As we drove on Soroti Road, past Mbale town, we came across a crowd of ‘imbalu’ (circumcision) dancers. They seemed very happy and oblivious of their condition (I would not call it plight). A number were obviously inebriated, either by the local brew or from sipping on the small plastic sachets of which they seemed to have a copious supply.  The most outstanding characteristic of this band of natives was their class. They were all deeply rooted in the soil. Sons and daughters of the great Bagisu people who had by a dint of birth missed out on moving into the more privileged classes.

An idle mind is a wandering mind. On seeing these ‘imbalu’ dancers, I quickly remembered the Oxfam Chiefess’ tweet about ‘okufukamira’ (kneeling), replete with photo of a native Ganda woman. The crime of the native woman: she had knelt to greet the Chiefess and the latter did not like it. To her, it probably felt like the male Gandas had oppressed her by forcing her to ‘kneel’ when greeting her social betters. The tweet had elicited several contradictory responses.

My own take on the ‘okufukamira’ and ‘imbalu’ was at variance with the lady from Oxfam. (I was reminded of a saying a friend once told me about food. He had said that ‘when a rich (wo)man sees a hungry (wo)man eating, s(he) does not say that the latter is angry, (s)he says the latter is greedy’!) And so here was the Oxfam guru completely misreading the context. The native did not kneel because she wanted to. She just didn’t know better. Neither had life offered her an opportunity to climb onto a higher social status like the ethnocentric and disconnected Chiefess from Oz. Similarly, it is highly unlikely that Bagisu who escape the clutches of peasantry, would offer up their children for the ‘imbalu’ ritual. This is the challenge of our times. Not to disparage cultures we find distasteful, but to lift others so that they too may not suffer the ‘injustices’ caused by poverty. Maybe the lady from Oxfam just got this last bit mixed up.