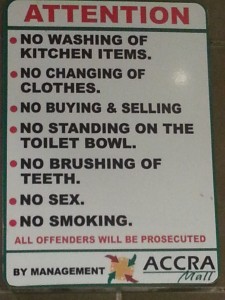 And so ended my sojourn in Ghana and Morocco – in an almost permanent period. To travel to Accra, until recently, one had to either go through Nairobi, Johannesburg or Dubai. I chose the latter and spent two days travelling either way. The same was true for Morocco and this didn’t seem to augur well with my health. At 30,000 feet, the tendency to develop deep vein thrombosis is pronounced and by the time I was leaving Rabat to return home, the clots in my leg had moved into my lungs and my health went south. But I live to tell the tale of my travels and to that I must return.

Accra was humid and rather hectic as its inhabitants tried to etch out a living. The city is expansive and well planned. As far as African cities go, it had a lot going for it – pothole free roads, lots of construction and many young people doing nothing. To this I will return as the gist of this article, but one must also rope in Rabat. Morocco is an old kingdom civilization and its proximity to Europe was all too evident. Large sprawling estates and farms, seaside towns and well built highways. Yes one could mistakenly believe they had crossed over to Gibraltar in Spain. There was nothing African in the sense that we in the sub continent know and live. Further comment is inappropriate as my exploration of Rabat was interrupted by my condition.

And to Accra I return. We were there to attend the International Academy of African Business Development conference. In between the workshops and the golf, we toured the city. Because of the humidity, we always ended up retreating to the air-conditioned Accra Mall. It was a pleasant place, and here most of my impressions of the way Africa is going were concretized. The life in the malls – and this cuts across the subcontinent, is an imported one. There were modern pubs with cable TV, eateries, and a collection of shops selling all sorts of gizmos including the latest Samsung phone. A visit to the shops in all the countries yields the same results. One has to, more often than not, buy expensively that which is made in China or imported from Europe and America.

But what caught my eye was the human traffic. It was interesting watching the mass of humanity go about their business. Only that these were mainly young people – Africa’s so-called population dividend. They shuffled this way and that way. Most held a smart phone. The boys’ trousers hang below their buttocks, exposing their underwear and reflecting that offensive American pop culture. The girls had fake hair extensions, which they casually tossed to the sides, in imitation of their Caucasian sisters. From the wafts of conversation I was able to pick, I guessed many were educated, or had been to school. But what did they do for a living?

I guessed that their parents provided for their needs. And I was concerned. Weren’t some of their parents the vendors I had seen at the various road junctions we had driven by? I hadn’t seen a preponderance of young people out there. But I had seen many weather beaten moms. Huffing and puffing as they tried to offload their imported trinkets upon the travellers.  It dawned on me that while Africa was indeed developing, we produced (in little measure) what we did not consume, and consumed what we did not produce (in large measure) including the imported culture. I could now see clearly, why we were in a debt trap. Old Africa was fast disappearing under the weight of new Africa, only that the new Africa was a voracious animal. Oblivious to its environmental footprint, bent on catching up with the rest of the world.

Until I visited the washrooms and saw the sign warning users to watch their toilet manners! It was a convoluted summary of where we were – at the cross roads of many conflicting civilizations. The sign spoke volumes. In our unguarded moments, we were apt to go native and squat atop the toilet seat and do our business in the ‘wrong’ place. But we had been influenced by America, Europe and China and we were struggling to find ourselves. You can take us out of the village, but you can’t take the village out of us, so the saying goes. But out of the village we must come, as this is the only way to modernise our societies.

If only we could pay for our way. After all, is it not one of those Americans who said there were no ‘free lunches’ or something like that? It was nice being in Accra and things are on the up. One is inclined to believe that Africa represents tomorrow and the youth with hanging pants (they call them balance) and hair extensions will turn out alright. They are our children after all. I reckon a time to pay will come and they will pay for the good times we are having. It is my fervent hope that things won’t fall apart.