‘Bodanomics’: how this column got its groove 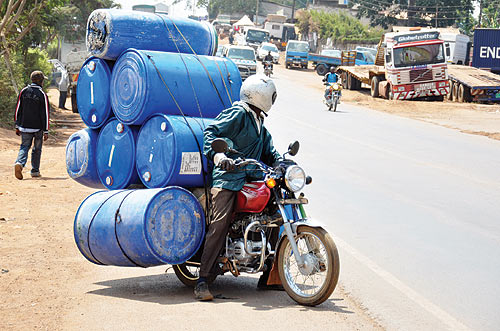 When the weekend features sub editor asked me to come up with a name for this column, I thought hard and long but to no avail. I then tried to ask around for ideas but none of the suggestions seemed to create an ‘Eureka’ moment.

A few days later, while travelling from Entebbe to Kampala, we came up against traffic at the Queen’s tower junction. The use of traffic lights had long been abandoned, and even though they still gave off regular stop-go signals, the police were using their judgment to manage the traffic flow.

Every now and then, a boda boda rider whizzed through, dodging the oncoming traffic, and hoping they would not be sent to heaven. To be fair, many riders stopped to heed the instructions of the police. The mass and number of riders was alarming and instructive. The cacophony was equally incredible as riders revved their bikes, human and other cargo straddled on the back seats.

I was struck, at how significant the boda boda (taxi motor cycle) had become in our economy. Was it a sign of the industrial grade jobs that were failing to materialize? Why were many of our youth, especially, caught up in the boda boda business? It dawned on me that we had become a boda boda economy.

The industrial jobs that should keep your average Byansi from riding a boda boda seem not to be materializing. Data from Uganda Bureau of Statistics show that industrial output was only 22.3% of total GDP in 2015. The lack of industrial grade jobs has pushed many youth into a business that comes with a peculiar set of rules and mentality – a bodanomics mentality.

In these days of Google™, it is always prudent to cross check. My search showed that one Mike Miesen, an expatriate with Gradian Health Systems had beaten me to it (see http://www.whydev.org/bodanomics-the-ethics-of-expat-negotiation/). He used the term to explain the ethical dilemmas surrounding the negotiation of a fee for a boda boda ride by an expatriate. Miesen noted that if the client was a ‘muzungu’, the fee tended to be twice or thrice the charge for the local. He was having none of it, hence engaging in bodanomics – a sort of one-upmanship to negotiate and not pay the ‘muzungu’ price (about US $ 0.80 as opposed to US $ 0.40).

Taking Miesen’s argument a step further, I felt that the term could be extended to the dilemmas developing countries face in decision-making. For me bodanomics embodied the art of decision-making based on a boda boda (smallness) mentality. From the way the boda boda rider negotiates fees depending on the demographic and social characteristics of his potential client, to the way public officials make national decisions based on self-interest.

Why does the boda boda rider risk life and limb to zoom in and out of the traffic for such a desultory fee? Similarly, what kind of considerations and mentality inform the minds of those responsible for making national decisions? Why would a policy maker unfavorably advocate for the award of a national concession/contract to the detriment of the rest of his countrymen, just so that his/her son may get a scholarship to study at Harvard?

Maybe this boda boda mentality has come to permeate and influence the way we think and arrive at decisions.  We have evolved and perfected a short-term view of self-gratification (like the boda boda rider), a disregard for the national interest and the collective well-being of our nation/people. Welcome to ‘Bodanomics’.