The Pothole Theory: How to Fix The Economy and Other Stories 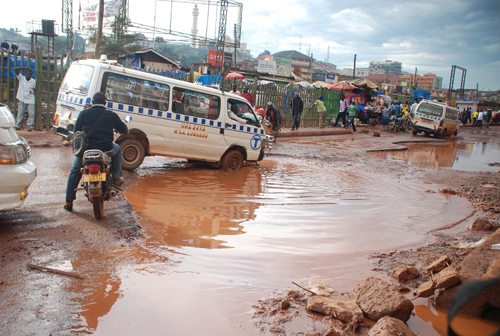 While we are on the subject of critical thinking, let me go out on a limb on how to fix the economy. Some gurus know what ails the economy and have been telling us for a while. Nuwagaba and Muhumuza have told you. It is Ggoobi’s pet subject: he dreams about it in the night.

One fellow wrote a book about it. His friend Kazinda teaches about it at Luzira University. Obey and others know about it. So why don’t you know about it? It is the damn potholes, stupid! Now that you know, let me propose some measure(s) to fix those potholes.

Before I tell you how to fix the potholes, I need to tell you why I think the potholes are the problem. Potholes don’t talk, so they can’t tell you when they are going to form. However, if no one fixes a pothole, then other potholes think its okay to form. So they keep on forming in different shapes and sizes. Potholes convey a sense of anarchy, and soon spread from road to road. Soon they cause disorder as traffic jams grow, and drivers start driving over the pavement or commandeer police lead cars to throw taxpayers off the road.

Hawkers begin to think that because there are potholes, the streetlights don’t work, and the garbage is not collected, it is okay to go vending on the streets. So you have an innocuous thing like a pothole, which is a constant feature of our environment starting an epidemic!

On a more serious note, what Nuwagaba, Muhumuza and Ggoobi have been telling you is that we have a structural problem in the economy. Our agricultural sector employs over 76% of the population but produces only 23% of GDP. We consume more imports than we export. Our services sector, which is largely foreign owned, produces about 44.3% of our GDP but employs only 1% of the population. Our fiscal deficit leaves in heaven. And the wise men from the East, consume a large portion of our budget, building dams, roads and a metal snake. There it is in one paragraph. Go figure if you still don’t know.

What Kazinda et al, know is that if you don’t have the capacity to fix the potholes, you can’t you fix an economy. Potholes trap water and other debris, preventing it from going where it ought to go. Instead of ending up in the lake, the water ends up in the damn potholes! So if some potholes are trapping all these ‘nice things’, other potholes form quickly to benefit from the bounty of the skies (taxpayers). If you still don’t get my prescription, go figure. In the words of Frederic Bastiat, (1894), “… government is the great fiction through which everybody endeavors to live at the expense of everybody else.” You must have darn good managers to fix potholes!

(Endote: The ‘Pothole Theory’ is a play on Wilson and Kelling’s ‘Broken Window Theory’.)