Our Very Own Seven ‘Deadly’ Sins 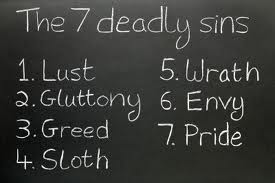 Ever heard of the seven deadly sins? The seven deadly sins are also known as the capital vices or cardinal sins. The sins are a classification of objectionable vices (part of Christian ethics) that have been used since early Christian times to educate and instruct Christians concerning fallen humanity’s tendency to sin. The currently recognized version of the sins are usually given as wrath, greed, sloth, pride, lust, envy, and gluttony.

According to the Roman Catholic Church, sin can be venial or mortal (see Wikipedia). Venial sin is sin in which guilt is relatively minor. The more severe sin is known as mortal sin. Theologically, a mortal or deadly sin is believed to destroy the life of grace and charity within a person and thus creates the threat of eternal damnation. “Mortal sin, by attacking the vital principle within us – that is, charity – necessitates a new initiative of God’s mercy and a conversion of heart which is normally accomplished [for Catholics] within the setting of the sacrament of reconciliation.”

So what are those very Ugandan sins that are supposedly mortal? Take heart because we don’t even consider them to be sins. Rather, they are peculiarities that mark us out as truly Ugandan. Here goes my hilarious list of deadly or venial sins, depending on how seriously you take matters of God.

Begging for money: we Ugandans have turned this into an art form and national pastime. From young kids to our very own Pastors in the Church. Ugandan’s have no shame. We will ask for money for food, parties, funeral rites, and just about everything. Woe to you if you don’t give because it is our right to be given! There is an enforced sense of community here.

Carrying fish on your car bonnet: any traveller along any of the major highways which goes by a lake has seen the speeding ‘wabenzi’ with their fresh fish purchases hitched to the front of the car. Those in matatu’s (taxi) now believe this is the in thing! Every matatu will have fish tied to the bonnet. If I visit you after a safari and don’t eat your fish, please understand my predicament!

Drinking beer from straws : this one started with Idi Amin’s economic war. Beer became so scarce, if you got one in a ‘Kafunda’ (black market beer joint), you put it in a paper bag and sipped surreptitiously using a straw as others around you killed themselves quickly with crude waragi. The advent of HIV/AIDS firmed up this habit as we became aghast at sharing glasses. Today it is the Englishman’s equivalent of fish and chips in a copy of ‘the Sun newspaper!

Throwing your rubbish out of the car window:  don’t give me that crap about the environment. The world is one big rubbish pit. So apart from ‘flying toilets in slums’, you will see Ugandan’s in their beautiful Range Rover cars throwing chicken bones and sundry out of the car windows as they cruise along!

Coming late and lying:  this is very African and you can’t blame us on our sense of time. From the mightiest to the meekest, we measure time by the Sun. Who cares for your ‘Philippe Patek’?

Writing our names in the wrong order:  did I just say Philippe Patek or Patek Philippe? That is very Ugandan. As in my name is Sejjaaka Samuel. One of my mentors attributes this problem to the advent of Microsoft™. I think it is just another offshoot of an education system in labour. You now can’t tell whether we are on first name terms or being formal. Blame my age on this one!

Claiming to have known about events after they have happened: it is very bad manners to confront your seniors with a problem, be it about their behaviour or the work place. Just stay in your place until the proverbial s**t hits the fan. After that you can then opine that ‘Nze, for me, I knew what was going to happen’! You can be ostracized for speaking the truth when the time for speaking the truth hasn’t come.

These then are our gentle vices. Not deadly really, for we are still a genial and happy lot. We still eat, drink, laugh and add to the World’s population with abandon. If you ask me, I would never, ala Monsieur Gerard Depardieu, give up on my Ugandaness. NEVER!