Of God Sex and Politics 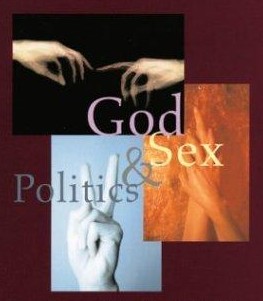 Who are the people you always remember most in your life? If you have or had parents and children, I guess they come first. Then if you were lucky to receive an education worth talking about, your teachers come next. And in discussing God, sex and politics, I am inclined to recall the influence some of my teachers have had on my thinking and outlook. One of my professors (may the he receive a bountiful reward) told me that most people had an opinion about God, sex and politics. And so if he was taking a class and nobody seemed interested, he would turn to one of these three themes. ‘Believe me Sam,’ he said, ‘everybody thinks they know a lot about these three things.’ My Professor was spot on and it has always intrigued me how people are fixated by these themes.

And so first to God. The jury on his existence has been out so long, they are probably never going to come home with the verdict. The matter of God evokes deep emotions amongst men and women, it is not surprising that this matter of the supernatural is the cause of so much distress, plunder and murder.  Just this evening I saw on Al Jazeera Television, pictures a woman who had been stoned to death for adultery! And I wondered, what kind of God would allow his creatures to be treated in such a manner for indulging in the most basic of instincts – sex.Why would Christian kill Moslem, or why would Moslem kill Christian? Is this the way of Jesus and Muhammad (peace be upon him)? Karl Marx called religion the opiate of the people. If it is anywhere near opium, then small wonder many are called to sin in the name of God! Perhaps your best answer to God is Pascal’s wager. The long and short of it is that you should wager on the side of God’s existence. If he exists and you believe, you will go to heaven. If he doesn’t, you lose nothing. I guess being liberal about matterspertaining to God’s existence or non existence is a safer option.

And now to sex. Well again everybody has an opinion about sex. Most of us think we have enormous sexual prowess. Even when we can’t stay the course for three minutes (to beep according to one Ugandan tabloid), we still think we are God’s (there you go again!) gift to the world. Many more of us think that other people’s sexual orientations are taboo.  Africans (especially the bishops and politicians) cannot countenance one man coveting another’s behind, or a woman getting down on her sister. And there has been a second schism in the church because of people’s sexual orientations. Do not be surprised, because the first schism was also caused by bedroom matters. So you see how sex gets in the way of God’s affairs! The West on the other hand, would deny Africa aid for not respecting gay rights. I say with tongue in cheek, let the West legalize polygamy, and we Africans shall legalize homosexuality. It never hurt to negotiate a win win! Since its not my butt, and not your sister involved in the settlement, we could cut each other some slack!

To negotiate a détente about God and sexual orientations, we need politicians. Now these come in all shapes and sizes. To understand them you have to have read Jeremy Paxman’s ‘The Political Animal’. According to Paxman, they are either untrustworthy, power-hungry, hypocritical misfits or hopeless idealists! Now who would want such a set of ‘dysfunctional’ people negotiating for him matters regarding God and sex? Politics matters, but for the most part brings out the worst in human beings. Politicians care less about whether God exists or people’s sexual orientation. What they would really care for in this case, is their role in deciding whether God exists and whether we can lock up people of a sexual orientation that we do not approve of. Again according to Paxman, politicians would rather be on the stage losing, than off the stage winning. Put another way, their business is not to solve the problems of the world, but rather what bit part they played in solving or not solving the world’s woes. Pity, any of us can jump into the fray, for as with God and sex, we all have an opinion; even Sarah Palin has one!

And so the jury will be out for a long time. For you see there is no correct answer to matters pertaining to God, sex and politics. Every one has an opinion and which opinion can be wrong if it is just that – an opinion. The problem is that some people begin to believe that their opinions are factual. That they are the truth and we must all live by them! The best we can all do for each other is to be more tolerant and empathetic. That way we would make the world a better place.