A very good question: what next dear graduate? 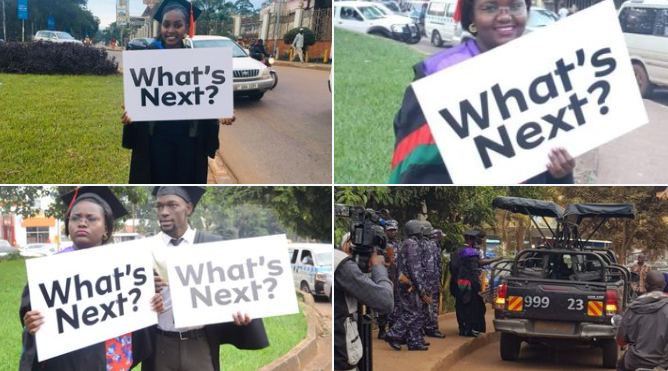 Three weeks ago, Makerere University held its annual graduation ceremony: the 70th, to be exact. There were a bout 13,509 graduands who were awarded various degrees and diplomas in all the pragmatic and not so pragmatic stuff that our beloved University teaches. Out of these, 50.5% were female and 49.5% male. The ceremony took place over four days and was presided over by a Chancellor who these days happens not to be the President.

This week, some graduands were out on the street in a peaceful demonstration asking “What next?”. They soon got the answer from the Police which quickly pounced on their demonstration and took them for ‘accommodation’ in their not so nice quarters. They were lucky they didn’t get some tear gas and knocks: a treatment usually reserved for dissenting political actors.

A lot has changed for Makerere over time and whereas the question of “what next” may have been poised in a naïve context, it deserves some attention. There are many things these kids don’t know and one cannot blame them. But with time they will know.

First, the fact that there were about 13,000 of them graduating is in itself an incredible statistic. Consider that in 1954, when Makerere held its first graduation there were only 13 graduates, all male! So the number of graduands has grown a thousand fold (Eunice Lubega Posnansky was the first female graduate in 1955). Or consider that in 1988, there were 1,320 graduands. Since then the number of graduands has grown hundred fold, but without the attendant improvement in faculty and facilities.

Second, despite the exponential growth in the number of graduands, jobs have not grown at the same rate. Out of the 13,000 or so graduands, probably (and I am being optimistic) about 20% will get employed formally. Depending the parental lottery, you may be destined for the streets.

This is why the question, “what next” will become even more important in the next one year for our graduands. Before I dispense some unsolicited advice, let me quote Alvin Toffler for you: “The illiterate of the 21st century will not be those who cannot read and write, but those who cannot learn, unlearn, and relearn”. In the gig economy of today, that is going to be a critical issue for you dear graduate.

Here then are some lessons to help you along as you answer the “what next” question. First you need to unlearn most of the things you were taught at University. Most of them are of pretty little use in your life going forward. So start by unlearning what you learnt.

Second, nobody owes you anything, apart from your parents probably. But they too probably have spent all their wealth on you, thinking you are going to become the next best thing after sliced bread! Quickly lose your sense of entitlement! There are 44 million of us in this corner of the world, and you are not as important as you think!
Three, start learning a trade. Get apprenticed to someone doing some business, even if that apprenticeship is free. You will need to learn to do something useful and perhaps even more menial than you think. As you get apprenticed, start on a professional program. The academics who were teaching you at University were probably just that: academics. All they taught you was principles.

Four, get yourself a mentor or coach. You need to learn life’s skills like emotional intelligence and financial discipline. You will need to learn problem solving, collaboration, multitasking and adaptability. Most of you cannot even write a decent job application letter, so start reading and learning how to write.

Fifth, and perhaps most important, you got to graduate by cramming and regurgitating class material. You better quickly learn how to learn. If all fails, we could still ship you to the Middle East as a contract labourer. It is pretty ugly out here. That is ‘what’s next”.