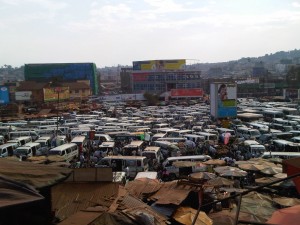 Over the last thirty years the population of Uganda has probably doubled. But in the case of Kampala, the population has grown fourfold while the planned part of the city has grown zilch in size. From a beautiful seven hills of the Impalas, the metropolis has grown into some hideous Dickensian monster. Teeming with slums and people, spreading in all directions over a radius of up to 15 or so miles in either direction, the city is a study in how not to plan.

Serene and tranquil atmosphere is no more. In its place is a mad din that begins at dawn and stretches into the wee hours of the night. Planning and city ordinances count for nothing. As Kampalans go about eking a living in this monstrosity, we are slowly losing our civility because of the inclement and vicarious surroundings that we are being forced to endure.

Of particular concern is the rate at which common property resources are being converted by the rich and powerful. From children’s parks to school grounds, from swamps to fragile hilltops, the barbaric manner in which our common heritage is being destroyed is alarming. All of this, under the pretext of development. The truth is the city is choking while the nouveau rich indulge in their feeding frenzy. I fondly recall the Lugogo grounds where we played football as kids. I recall the space was so vast and was also a riparian reserve of sorts. The children’s’ park at Wandegya, the open spaces at Kisementi and Nsambya. The swamps between Nakawa , Kyambogo and in Bugolobi. The football fields at Buganda Road, Kyaggwe Road and Shimoni. Come take a look, and see what charlatans are doing in the name of development. We need development, but this cannot be called development. The damage occasioned by the actions of these men and women is unfortunate. What legacy are we leaving for the next generation?

The madness of ‘malls and towers’ has reached a fever pitch crescendo! But we ought, as a society to say enough is enough. The city needs relief because the barbarians are not at the gate anymore. They are in the sitting room amidst the china. Maybe the new CEO of Kampala City Council Authority, she of a more civilized disposition, may still come to Kampala’s rescue.  Over to you madam, show us where our grand children will go play.